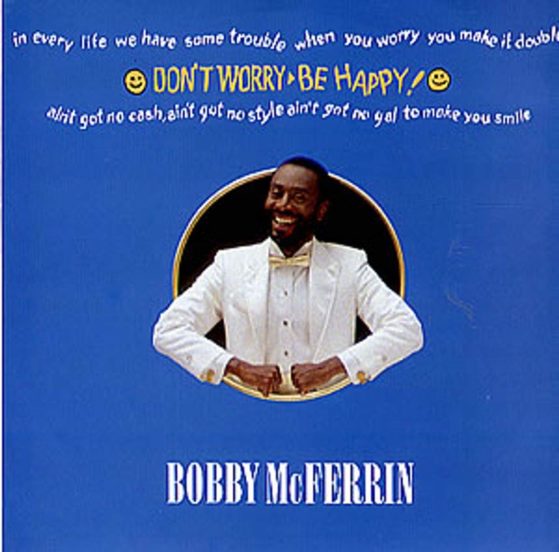 “Don’t Worry, Be Happy” a 1988 song by Bobby McFerrin, released as the first single from his fourth album, Simple Pleasures (1988).

It was the first a cappella song to reach number-one on the Billboard Hot 100 chart, a position it held for two weeks.
Originally released in conjunction with the film Cocktail, the song peaked at number-one on September 24, 1988, displacing “Sweet Child o’ Mine” by Guns N’ Roses.

The song also peaked at number 11 on the Billboard Hot Black Singles chart and number seven on the Billboard Hot Adult Contemporary Tracks chart. It was also a hit in the United Kingdom, reaching number two during its fifth week on the UK Singles Chart. In Canada, the song reached number-one in its eighth week. One critic noted it as a “formula for facing life’s trials”

At the 1989 Grammy Awards, “Don’t Worry, Be Happy” won the awards for Song of the Year, Record of the Year, and Best Male Pop Vocal Performance.

The comedic original music video for the song stars McFerrin, Robin Williams, and Bill Irwin, and is somewhat shorter than the album version.