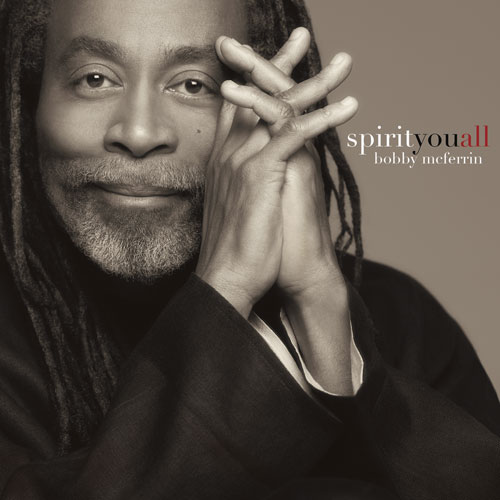 Bobby McFerrin surprises us again, bringing it all back home with his new album, spirityouall. Now Bobby invites us to sit on the stoop awhile and listen as he throws some unexpected new ingredients into the melting pot and reinvents Americana. He invites us back to the great folk tradition of lifting our voices to sing together through life’s trials and triumphs.

“These time-tested songs shine like liquid mercury exploding. The riches that make up spirityouall cannot be overestimated. This is fully realized music. This is music that heals.” – C. Michael Bailey, All About Jazz

spirityouall features beloved familiar tunes like “He’s Got the Whole World In His Hands” and “Every Time I Feel The Spirit” alongside original songs which explore Bobby’s everyday search for grace, wisdom, and freedom. The new material ranges from a celebratory hoedown (“Rest”) to a polemic anthem (“Woe”), to a down and dirty blues setting of Psalm 25:15. This project embraces Bobby’s folk, rock, and blues influences without abandoning his fearless improvisational approach or his never-ending exploration of the human voice. He moves seamlessly between lyrics and wordless lines, trading phrases with his band, inviting the audience to sing along. Bobby loves to sing this music, and it shows: spirityouall raises the roof with joyful grooves.

spirityouall continues Bobby’s life-long quest to integrate all the influences of the musical universe. But as in so many great American tales, sometimes it turns out that everything one is searching for is in one’s own backyard. The project honors the legacy of Bobby’s father, the great operatic baritone Robert McFerrin, Sr., the first African-American to sign a contract with the Metropolitan Opera Company and a renowned interpreter of the American Negro Spiritual. ” I always thought that someday I’d sing these songs,” Bobby says, “and that I’d have to find a way of doing it that was completely different from my father’s approach. I think the idea has been kicking around for at least a couple of decades. And it was finally time.”

Three of the traditional numbers featured on spirityouall —the opening track “Every Time I Feel the Spirit,” “Swing Low Sweet Chariot” and “Fix Me Jesus”—also appeared on the senior McFerrin’s 1957 album Deep River, but similarities end there. The spirituals are about liberation and courage, the human condition, the pioneering spirit, the search for strength in the face of adversity, and the journey toward a better place, and Bobby’s versions reach for new territory.

spirityouall is a deeply personal statement for Bobby McFerrin. “I couldn’t do anything without faith,” he says. “I couldn’t open up my eyes, I couldn’t walk, I couldn’t speak, I couldn’t sing. What I want everyone to experience at the end of my concerts is . . . .this sense of rejoicing. I don’t want the audience to be blown away by what I do, I want them to have this sense of real joy, from the depths of their being. Then you open up a place where grace can come in.” Lift your voice, open your heart, and sing along.