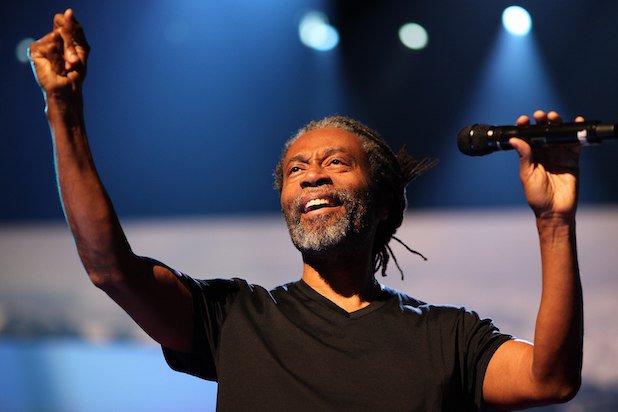 “I’ve always been in love with the vulnerability of a person, alone, on stage, playing. I figured if I could sing alone and find, pull the essence out of music, pull the inner being, pull the harmonies and do it somehow by myself, that would make me a better collaborator in the long run. I had been enamored with the work that Keith Jarrett was doing as a solo pianist. It asked me the questions for which I was seeking answers: “What is it you want to do? Do you want to explore music this way?” And my answer was yes, and it was Keith who did that. And so my goal was to be a solo vocalist. That was primarily what I was focusing towards. I had to do this. I had to do the solo stuff.

It took me at least 2 years, 3 years, of going into a room by myself and turning on a tape recorder and singing before I felt comfortable singing in front of other people. I was afraid to sing around anyone. I was intimidated by the sound of my own voice. I would wait until the house was empty and then I would sing. So it took time. It took six years before I did my first solo concert. So it took about six years of singing constantly, doing a lot of practicing. For the first two years I didn’t listen to another singer. Because I wanted to find what my voice sounded like.

So I would go into a room, turn on a tape recorder and sing. Then I started noticing some things I was able to do with my voice that all of a sudden became very interesting and very useful. I worked on a technique, singing one note at a time that would suggest that there was more going on than there actually was. I hear people say, ‘How do you sing more than one note at a time?’ It was simply finding a technique that allowed me to explore the voice in as deeply a manner as possible.

I worked really hard trying to find out who I was as a singer. In the very beginning, I purposely stayed away from listening to a lot of singers. I turned on the tape recorder just to see what I sounded like, because I knew that I could be easily influenced by someone else’s style or phrasing. I wanted to make sure that I had a strong base of my own, because I could easily flounder by going out and just copping somebody else’s licks. I used to do that as a piano player and I knew that wasn’t going to get me anywhere. So my singing had to be very, very different.

But it took years before I got pass the point where I would even sing in a room with other people, because I was afraid. I still get nervous. Improvisation is so risky. You just never know what’s going to happen and it’s a fearful kind of thing, but that kind of wonderful fearful kind of thing. It’s the kind of fear you want to feel. So you have to listen to yourself. I’m so tired of these mellismatic singers nowadays – all these singers, these young kids – everybody is singing the same kind of way. So go off in a room by yourself. Take a 40 day fast from music, and just sing. Find out what you sound like. It’s hard to do, but it’s really worth it.

Mozart, Bach, Beethoven – they were all great improvisers. What we have now has been written down, and we forget that it began as improvisation. In some ways, the best part of their music making has been lost. Improvisation is basically movement – the courage to take steps. You play one note. And then you play another note. That’s it. You just keep going. You don’t have to know anything about theory, you don’t have to know what you’re doing. Kids don’t. They don’t know what a ‘picardi third’ is. They don’t know what an ‘Ionian mode’ is. Or a ‘Dorian mode’. Major minor thirds. They just sing.

When I was developing my own approach to improvisation, the only thing I had to practice was getting over the fear of doing it. I think that’s the only thing that really hampers people from improvising: they’re just afraid of looking like a fool or not having enough ideas. It’s a risk. It’s like opening a door to a dark room and going in. You don’t know what you’ll find. But I find that fascinating.

It doesn’t matter where you land. Just the act of leaping is where it’s at for me. That’s the big lesson: itÃ­s the process. It’s the joy of the journey that’s the important thing.”